I've discussed, at length, in previous posts the inability of Walgreens and Express Scripts to come to a mutual agreement. Now Walgreens, the largest chain drugstore in the USA by almost 2/1, has agreed to purchase a 45% stake in Alliance Boots for $6.4 billion. Boots is a leading international, pharmacy-led health and beauty group delivering a range of products and services to 21 countries primarily in Europe. This investment makes Walgreens the largest single purchaser of prescription drugs in the world.

Why would Walgreens make such a large investment even before the Supreme's Court ruling on PPACA? In cities all across America small healthcare entities are being gobbled up by behemoth healthcare organizations. Small physician practices are closing their doors only to become salaried employees at hospitals. Not independent contractors as is customary, but salaried employees taking a steep pay cut.

Small hospitals are being acquired by larger hospital corporations and these hospitals are purchasing specialty physician groups. Take the Kansas University Hospital acquisition of a 42,000-square-foot inpatient surgical hospital building to add to its system of services. The hospital plans to hire the facility’s more than 130 non-physician employees. KU Hospital intends to use the building for surgery by a variety of specialties. A new name for the building will be announced later, along with the specialties using the new space. 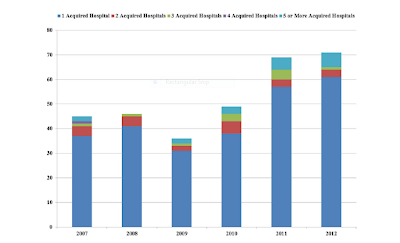 KU Hospital did not disclose the cost of the transaction, which is expected to close in the early summer. The Heartland Surgical Specialty Hospital plans to relocate its operations to a new location, according to the KU Hospital release. This is the purchase of a business disguised as a "building" purchase.


Heartland is going to relocate without its 130 non-physician employees, really? Many of Heartlands physicians will join KU hospital as salaried employees.

The purpose of defragmentation is control. The federal government wants to have more say about how healthcare is distributed in this country. Small self-insured (grandfathered) businesses have largely been unaffected by healthcare reform. In fact, my opinion is that PPACA has offered small and medium size businesses more choices at least until now.

The Obama administration is investigating the possibility of imposing limits on stop-loss coverage that could severely undermine the ability of small and midsize businesses to offer self-insured plans. It stems from a formal request for information about federal rules relating to stop-loss insurance, which is seen as a precursor to a regulation.

Critics contend that such a move would force these employers to adopt less flexible, fully insured plans and funnel millions of Americans into health insurance exchange that are slated to take effect in 2014 under PPACA. They also are crying foul about big business having an unfair advantage and raising questions about what may be motivating regulators to pursue this action.

Several leading Republican senators have sought an explanation from the Departments of Treasury, Labor, and Health and Human Services as to why they submitted an RFI. Olympia Snowe (R-Maine), Michael Enzi (R-Wyo.) and Tom Coburn, M.D. (R-Okla.) recently wrote in a letter that stop-loss insurance “is critical for operating a predictable, affordable self-insured health plan. Any possible disruption of these services is of paramount concern to lawmakers, employers, and tens of millions of plan participants.”

Lobbyists for small businesses and self-insured plans are sounding their own alarms over the prospect of stop-loss restrictions on self-insurance.  “The preamble of the RFI clearly demonstrates that the regulators have received significant disinformation about how the self-insurance marketplace actually operates and the role of stop-loss insurance,” explains Mike Ferguson, COO of the Self-Insurance Institute of America, Inc. in Simpsonville, S.C.

Amanda Austin, director of federal public policy for the National Federation of Independent Business in Washington, D.C., believes that the proposal is partly driven by a desire to ramp up PPACA insurance exchanges, calling it “one of many examples of PPACA-inspired micromanagement of health care.” NFIB fears that requiring its members to shuffle more paper will interfere with business growth.

The writing is on the wall. With help from the federal government, large healthcare firms are in acquiring mode. From pharmacy chains to hospitals to PBMs each is looking for a way to account for lower margins. The federal government will foot more of the bill thus profit margins will come down. But, any loss in profit margin will be made up for through volume.

The lower the number of players in the market the more control and power the government exerts. This ultimately will lead to higher prices and lower quality services. Consider the airline industry. There are fewer players and prices have drastically increased while the quality of service has suffered. In fact, airline industries have become down right arrogant. In the case of healthcare reform, history will undoubtedly repeat itself.
Posted by Tyrone Squires, MBA, CPBS at 1:55:00 PM