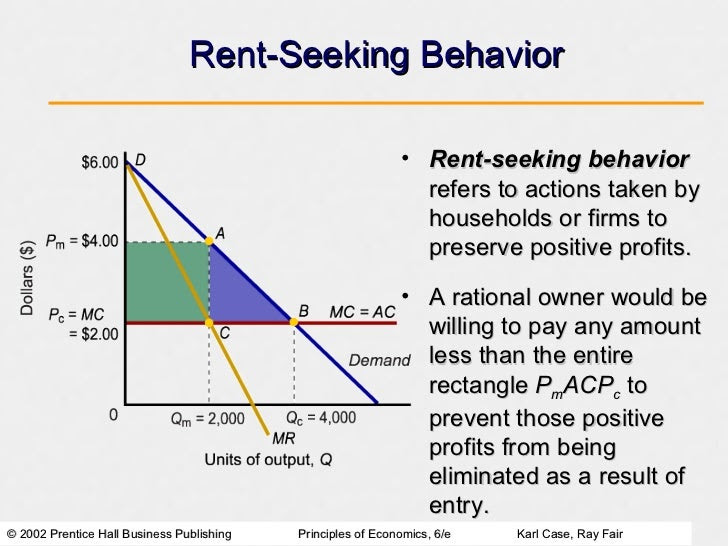 Rent-seeking is a term economists use to describe an organization's ability to generate above average economic returns without providing any relative incremental value. Wikipedia may explain it a bit better.

Profit-seeking is the creation of wealth, while rent-seeking is the use of social institutions such as the power of government to redistribute wealth among different groups without creating new wealth. Rent-seeking generally implies extraction of uncompensated value from others without making any contribution to productivity.

The origin of the term refers to gaining control of land or other pre-existing natural resources. In a modern economy, a more common example of rent-seeking would be political lobbying to obtain government benefits/subsidies or to impose burdensome regulations on competitors in order to increase market share.

How does a traditional PBM employ a rent-seeking methodology?

Most recently, the FTC approved the acquisition of Medco by Express Scripts. The net effect of this purchase is not a creation of new wealth, but instead a reduction in social wealth. The FTC approval of this acquisition will ultimately benefit only the government, Express Script and Medco stockholders.

Patients won't pay lower prices or see a real difference in their health care outcomes. Retail pharmacies and PBM competitors certainly won't benefit from this acquisition. History tells us that greed will supersede social responsibility almost 100% of the time. Express Scripts has used the government, with powerful lobbying, to attain near monopolistic privileges.

Some state governments, Texas for example, require PBMs to take on the role of a fiduciary. The problem is that this requirement doesn't extend to private enterprise. I say it's a problem not because the government hasn't interfered, but the opposite. Private enterprise hasn't exercised its right to require a fiduciary role from their PBM. A transparent PBM, acting as a fiduciary, shares the risk and essentially agrees to be 100% transparent in all of its related business dealings.

This transparency includes sharing third party pricing contracts with pharmacies and rebates from manufacturers. It also includes offering real-time access to MAC price lists for retail and captive mail-order pharmacies. As specialty drugs become a larger part of the dispensing mix, it's imperative to be fully aware of pricing arrangements between biotechnology companies as well. Here is an example of a typical fiduciary disclosure in a transparent PBM contract.

“No Name PBM” owes a fiduciary duty to Client and shall discharge that duty in accordance with the provisions set forth herein.

(a) “No Name PBM” shall perform its duties with care, skill, prudence and diligence and in accordance with the standards of conduct applicable to a fiduciary in an enterprise of a like character and with like aims.

(b) “No Name PBM” shall notify Client in writing of any activity, policy or practice of “No Name PBM” that directly or indirectly presents any conflict of interest with the duties imposed by this subsection.

Do you have such language in your contract? If you are dealing with a traditional PBM chances are you won't get it! Traditional PBMs make money by rent-seeking and not by being fully transparent. And if you think health care reform will fix this I urge you to think twice. The solution is to deal only with PBMs willing to sign on as a fiduciary. This begs the question, "how many checks are you willing to cut for traditional PBM services without knowing exactly what you're getting in return?"
Posted by Tyrone Squires, MBA, CPBS at 11:23:00 AM