Spending in the U.S. on specialty drugs used to treat serious diseases is projected to increase 67 percent by the end of 2015, according to a forecast  by pharmacy benefit management firm Express Scripts.

Specialty medicines are those used to treat chronic, complex diseases such as cancer, multiple sclerosis and rheumatoid arthritis. They are prescription drugs that require special handling, distribution and administration. Many specialty medicines are biologics that are delivered via an injection or an infusion and are used to treat chronic, complex diseases.

Prescription drug spending on eight of the top 10 specialty therapy classes will continue to increase over the next three years, according to the report. This is due to both the introduction of new biologics and physicians delaying treatment of patients until the new drugs are on the market.

According to the forecast, overall spending on traditional prescription drugs – mostly pills used to treat common conditions such as high cholesterol and depression – will decline four percent by the end of 2015, largely because of the availability of generic medications. Only two of the top 10 traditional drugs — for diabetes and attention disorders — are likely to have spending increases over the next three years, but those increases will be significant.

Express Scripts said it expects that cancer, multiple sclerosis and inflammatory conditions such as rheumatoid arthritis — all specialty conditions — each will command higher drug spending than any other therapy class except diabetes by the end of 2015. 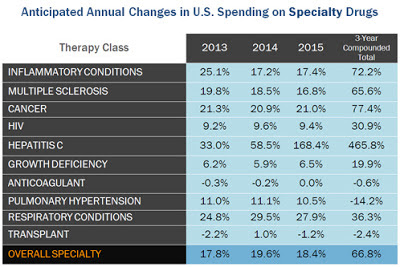 Hepatitis C drug spending likely will quadruple over the next three years, the largest percentage increase by far among therapy classes.  This increase will be caused in part by new interferon-free medications expected to gain FDA-approval in 2014.

“As we see what’s on the horizon, it’s time for employers and health plans to act so they can continue to offer an affordable pharmacy benefit for their members,” said Glen Stettin, M.D., senior vice president, Clinical, Research and New Solutions at Express Scripts. “New specialty treatments are making a real difference in the lives of patients, but the very high cost of these drugs creates difficult decisions for plan sponsors on which medicines to cover.”

Biosimilars, which are  less-costly alternatives to biologics, could become available once the patents expire on currently marketed biologics, a development that could help mitigate the rising cost of specialty medications.. Express Scripts recently projected that the country would save $250 billion between 2014 and 2024 if the 11 most likely biosimilar candidates were launched in the U.S.

Diabetes became the costliest prescription drug therapy class in 2011, and according to the new projections, it will continue to hold that distinction at least through 2015. Over the next three years, Express Scripts expects spending on diabetes medications to rise an additional 24 percent because of high prevalence and a robust pipeline of new therapies.

Despite the availability of generic equivalents for many attention disorder therapies, the data projects spending in the category to increase approximately 25 percent over the next three years, driven by increased utilization among middle-aged adults and wide geographic variation in diagnosis.

Express Scripts said its research shows that prevalence, medication use and associated medical and pharmacy costs for attention disorders is highest in the South. However, the Northeast region of the U.S. experienced rapid growth in attention disorder diagnosis, and that region’s associated costs grew nearly 60 percent from 2008 to 2010.

“In the absence of new therapies, to see such an increase in a traditional drug category suggests there is significant opportunity to better manage attention disorders,” said Dr. Stettin.

As part of its analysis, Express Scripts incorporates historical prescription drug cost and utilization trends from its own pharmacy claims data, the pipeline for emerging therapies, anticipated patent expirations, and other clinical and demographic factors.