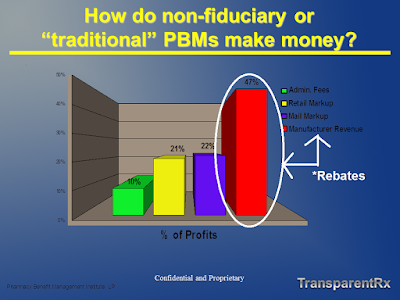 On June 1, 2016, in the southern district of Texas Federal Court, United HealthCare administered self-insured ERISA plan, AT&T Inc. and its Plan Administrator Larry Ruzicka were sued in federal court. According to the complaint: “This dispute arises out of Defendants’ ongoing and systematic ERISA violations consisting of an elaborate scheme to abstract, withhold, embezzle and convert self-insured Plan Assets.

An almost identical separate suit was filed against another United HealthCare administered health plan, GAP Inc. less than 30 days before this case was filed.  According to industry experts, more and more CEO’s, CFO’s and Plan Administrators are exposed to tremendous liabilities due to poorly managed or “Head in the Sand” monitoring practices. As we have written about and predicted, this is evidence of the growing trend of self-insured health plans being exposed to tremendous liability by TPAs.

Tyrone's comment:  It's simple, if a plan sponsor doesn't have full auditing rights they're likely overpaying; not just for medical, but pharmacy claims as well. These overpayments can lead to lawsuits against the CEO, CFO and others. "We didn't know..." is no longer an excuse. For starters, do you know how much your company (or client) pays the PBM for providing pharmacy benefit management services? This is different from plan costs. Somewhere hidden in the plan costs are the PBM's service revenues. To not know this dollar amount is negligent. Click here to learn more.

One of the serious problems these cases present to the self-insured health plans is inaccuracies on the Form 5500/Tax filings. ERISA requires IRS Form 5500 reporting to be accurate. AT&T, GAP Inc. and others may be reporting incorrect amounts on direct and indirect compensation, for example, based on the alleged facts of these cases.

According to court documents, REDOAK Hospital Plaintiff filed a DOL EBSA Complaint on the alleged overpayment offset by the Defendants Plan, and the plan’s co-fiduciary, UHC, prior to filling this ERISA lawsuit, alleging:

“This dispute arises out of [AT&T’s]ongoing and systematic ERISA violations consisting of an elaborate scheme to abstract, withhold, embezzle and convert self-insured Plan Assets that were approved and allegedly paid to Plaintiff for Plaintiff’s claim, to purportedly, but impermissibly, satisfy a falsely alleged overpayment‖ for another stranger claim, especially when the stranger is a plan beneficiary of a fully-insured plan that is insured by the Plan’s co-fiduciary, United Healthcare (hereinafter, “United”).[AT&T] knew or should have known that the Plan’s overpayment recovery provisions cannot be triggered until there is an allegation of overpayment by the Plan to the Plan Beneficiary subject to this action, and that converting the Plan Assets by a fiduciary or co-fiduciary of the Plan, in this case United, to the use of another, and ultimately its own use, to pay to its own account is absolutely prohibited under ERISA statutes. [AT&T] and United have conspired and engaged in many other embezzlement schemes, including, but not limited to, making deductions on entitled claim payments through the misrepresentation that a Viant/Multiplan contract is in place with Plaintiff; this action is only challenging the cross-plan offset embezzlement scheme discussed in detail below.”, according to court documents.

According to RedOak attorney Ebadullah Khan, this and the Gap Inc. case represent the first of many more cases the hospital intends to bring for the same alleged violations. Kahn told Law360, “Prior to seeking judicial review for this case, RedOak Hospital had exhausted any and all internal/administrative appeal requirements,” Khan went on to say, “The cross-plan offset practice at issue in this case is the most common form of denial for RedOak Hospital, and as a result RedOak Hospital is preparing to file approximately 100 more cases similar to this AT&T complaint.”

As we have accurately predicted, the No. 1 health care claim denial in the country today is the overpayment recoupment and claims-offset.