Branded drug companies’ share of total U.S. spending on their products is declining, in part because of an increase in secret rebates paid to middlemen, according to an analysis sponsored by an industry group that’s been seeking to deflect scrutiny of rising prices. 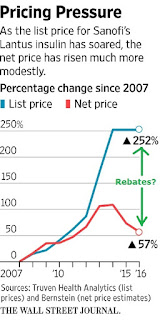 Of the estimated $349.1 billion that insurers and patients paid for brand-name drugs in 2015, $218.6 billion, or 63 percent, was realized as revenue by drugmakers, according to an analysis paid for by the Washington drug lobby, Pharmaceutical Research and Manufacturers of America. In 2013, pharma companies kept $177.5 billion, or 67 percent, of the $264.9 billion in gross expenditures for brand-name drugs.

Pharmaceutical companies are facing pressure from Washington lawmakers and patients over increasing prices for medications such as insulin, which diabetics need to survive. At a press conference last week, President-elect Donald Trump said the industry is “getting away with murder” and threatened to force companies to bid for government business. Drugmakers say significant discounts and rebates paid to middlemen, such as pharmacy benefit managers that negotiate prices for insurers and other payers, reduce their revenue.

“Manufacturers are offering greater and greater rebates to gain access to patients,” Aaron Vandervelde, managing director at the Berkeley Research Group consulting firm and the report’s lead author, said in an interview. “That is largely offsetting the list price increases.”

Overall, branded drug makers paid $106.4 billion in discounts, fees and rebates to health plans, pharmacy benefit managers and U.S. government health programs in 2015, up from $67 billion in 2013, according to the report. The Berkeley analysis is one of the first attempts to add up the variety of rebates and discounts paid on brand-name drugs, exact details of which are closely guarded trade secrets.

The consulting group also estimated markups and fees taken at various stages of the drug supply chain, including by distributors, pharmacies and the health-care providers who administer medications. Overall, the analysis found that branded drug companies paid $57.7 billion in rebates to pharmacy benefit managers and health plans in 2015, up from $33.2 billion in 2013. In addition, the companies paid $28.3 billion in rebates under the Medicaid program for the poor, up from $19.1 billion in 2013.

“Much of the media and much of the public discussion is focused on the list price” for drugs, Stephen Ubl, PhRMA’s CEO, said in a telephone interview. “This study is the first to show what happens when list price meets the forces of the private market.”

Pharmacy benefit managers have said their negotiations help keep drug prices in check, in part by pitting rival drugmakers against each other to get better deals.

The report “shows something that we’ve been saying all along: that payers have been demanding and getting bigger and bigger discounts and rebates as drug prices rise,” said Mark Merritt, CEO of the Pharmaceutical Care Management Association, an industry association that represents PBMs.

While individual clients of PBMs can get rebate information, Merritt said that it would undermine competition in the market to publicize detailed information on rebate amounts.