The AARP Public Policy Institute (PPI) has released a new Rx Price Watch report showing that, last year, the retail prices of 267 brand-name drugs that are commonly used by older Americans rose by an average of 5.8%—more than twice the general rate of inflation, which was 2.4%. 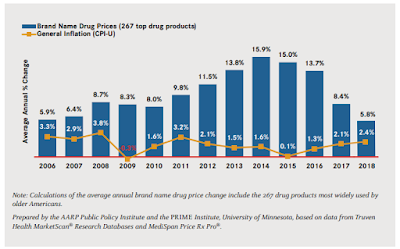 For over a decade, annual brand name drug price increases have exceeded the general inflation rate by 2-fold to more than 100-fold. The average annual cost for one brand name medication used on a chronic basis was more than $7,200 in 2018, almost four times higher than in 2006.

When monitoring PBM performance, go beyond standard reports. These reports don’t usually uncover problem areas that if resolved cost the PBM money but saves you [plan sponsor] money. How do you go beyond standard reports you might ask? For starters, download a copy of my 18 pt. PBM Performance Evaluation Questionnaire. Work with the PBM account manager on a corrective action plan when problems are uncovered. Some problems might include:

Complete the questionnaire every month and discuss the results with your PBM account manager as part of a continuous monitoring program. Don't wait until an annual audit it is often too late by then to mitigate overspending for the previous year. Drug cost trends aren't going to bend themselves. It is proactive programs like CM or continuous monitoring which aid in controlling drug costs.

“To put this into perspective: If gasoline prices had grown at the same rate as these widely-used brand-name drugs over the past 12 years, gas would cost $8.34 per gallon at the pump today,” said Debra Whitman, MA, PhD, executive vice president and chief public policy officer of AARP, in a statement. “Imagine how outraged Americans would be if they were forced to pay those kinds of prices.”