Although the cost-of-dispensing (COD) incurred by pharmacists in Florida is $10.24 per claim, according to the state's COD analysis, this required pharmacy reimbursement methodology does not apply to Medicaid managed care organizations (MCOs) that contract with PBMs. The report's analysis of Florida's top 7 MCOs found that pharmacies were paid a weighted average of $2.72 per claim in 2018—significantly lower than the $10.24 COD and down from $7.70 in 2014. 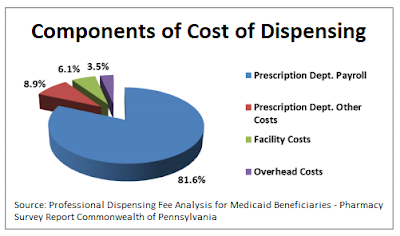 The authors noted, however, that not all pharmacies seem to be experiencing this pressure equally. In 2018, the state's 5 largest specialty pharmacies collected 28% of the available profits paid to all providers in Florida Medicaid managed care, despite dispensing just 0.4% of all managed care claims. Based on these findings, the authors wrote, "MCOs and PBMs appear to be using their control in managed care to incrementally shift dollars to their affiliated companies."

A contract rate is the reimbursement level agreed to between a single pharmacy and the PBM. The effective rate, however, is the blended performance rate among a group of pharmacies. It is the difference between these two contract rates which can create spreads and hidden cash flow to non-fiduciary PBMs. That spread can be taken during claim adjudication or after in the form of DIR fees. A spread is the difference between the amount reimbursed to the pharmacy and billed to the plan sponsor. Spreads are often much larger than a plan sponsor believes especially when measured on a pharmacy-by-pharmacy basis.

The authors said PBMs set generic prices differently for different pharmacies, which can create a significant advantage for pharmacies affiliated with the PBM. For example, they noted the displacement of Walgreens pharmacies by CVS pharmacies in both Staywell/Wellcare and Sunshine/Centene MCOs during the period when CVS Caremark was providing PBM services to those organizations.1

Furthermore, the report said payments for generic drugs vary greatly across MCOs and between PBMs within the same MCO. As an example, the authors noted that in 2018, Sunshine/Centene (managed partly by CVS Caremark) reported the cost of generic aripiprazole (Abilify, Otsuka America Pharmaceutical) to be $11.18, $0.53, and $0.24 at CVS, Small Pharmacies, and Public, respectively.